Marcelo Araújo, 21, claimed under questioning that he killed his wife, 22-year-old Francine dos Santos, after they rowed about her becoming pregnant for the third time.

The couple already had two children, a daughter, four, and a son, two.

He reportedly admitted that he didn’t want any more children, resented sharing his wife with them and hated the financial burden it placed on him as a young dad.

The suspect was found seriously injured after the crime, with cuts to his neck and wrists, in the family home in Várzea Paulista, a municipality in the State of São Paulo.

Cops said he had apparently tried to take his own life.

Investigators told Brazilian news outlet G1 that the admission came following more than six weeks of interrogation during which the accused gave several versions of what happened.

According to detectives, the suspect claimed that on December 22 last year, the couple started off discussing plans for their family Christmas dinner but matters escalated and it turned into a blazing argument about the pregnancy.

Shortly after the disagreement the pair appeared to resolve their differences and headed for the bedroom to make love.

But during the intimate session the suspect apparently stabbed his wife, a make-up artist, with a knife several times before slashing her throat with a blade. 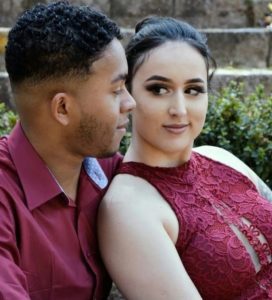